At a special town meeting on April 5, 1950 the name of the Rocky Hill Library was officially changed to the Cora J. Belden Library, in honor of Mrs. Belden's more than 30 years of service to the Library Board.

Cora Jane (Norton) Belden was born in 1867 in Plainville, CT. Upon her marriage in 1894 to Elwood Belden, Cora moved to Rocky Hill, where she was known for her dedication to her family and her many years of service to the town. She was an active volunteer at the library for more than 30 years, serving as both treasurer of the library and chairman of the Library Board. She selected, ordered, and processed books from her home for many years, and volunteered her services in the library whenever it was open. In 1950, several weeks before her death, during a special town meeting, the name of the Rocky Hill Library was officially changed to the Cora J. Belden Library. A photograph of Cora hangs in the Library's fiction area.

A History of Library Service In Rocky Hill

Library service began on December 11, 1794 at a meeting held at the home of Dr. Calvin Chapin, pastor of what is now the Rocky Hill Congregational Church, then known as the Third Congregational Church of Wethersfield. The  library began with a collection of 87 books, costing $88.89 plus horse hire to bring the books from the shop of Isaac Peers in New Haven. The collection was equally divided among history, theology, poetry and fiction. There were 68 subscribers, including 4 women, each of whom paid the equivalent of about $1.50 to join. In addition to the fee, each prospective member was screened by a committee.

For 50 years, this library was known as a Social library and was housed in Waite Williams' store, located at the "landing"' approximately where the ferry slip is now, with the store keeper acting as a librarian. A Hartford Courant article of December 13, 1959 noted that a customer could borrow a copy of Bacon's Essays and buy a flitch of bacon at the store.

Strange things happened in small towns then as now, and less than a month after the formation of the Social Library, a rival appeared on the scene.  It was known as the Free Library, which it wasn't. It lasted until 1820 when it merged with the Social Library and its name disappeared.  Membership was open to anyone who had the requisite $.75 fee; no screening was necessary. There were 77 subscribers, which included 12 women.

Later, the Union Library Society of Wethersfield, which was formed in 1784, disbanded and the books were sold. Hence our claim to be the oldest continuously operating library in Connecticut. In June 1855 the Reverend Lubin Burton Rockwood pastor of the Congregational Church organized a new society, which merged with the older Social Library to become the Social Library Association. For a decade, the library was located in Mr. Rockwood's home at 42 Riverview Road.

As if things were complicated enough, in 1860 another group of serious thinkers founded the Rocky Hill Lyceum. They were most interested in debates and lectures, but there were a few books which circulated. The guiding spirit of this endeavor was Dr. Rufus Griswold, and the members met at his home at 3 Riverview Road. On January 5, 1877, 82 years to the day after the founding of the free library, the four strands came together in the founding of the Rocky Hill Library Association, an organization which was to remain in existence until 1926. Adelaide Wright became librarian in 1882, a position she was to hold until 1918.

In the spring of 1886, the Rocky Hill Library moved into the second floor of what is now Academy Hall Museum. It seems worthy of note that part of  this area is now the Ethel Minor Cooke Historical Library, so we have now come full circle.

After ten years,  in 1896, the Library moved again, this time to the Bulkley House,  the former Valley Hotel, at the corner of Main Street and Grimes Road opposite the cemetery The books were kept in a former barroom and were checked in and out over the mahogany bar presided over by a sedate librarian, to quote the Courant of 1959.

By 1898, the Rocky Hill Library Association decided that the library deserved a permanent home. On December 16, the Association voted on and agreed "that the Executive Committee be empowered to purchase land for a building site." On February 10, 1899 they voted to purchase the land and a committee of five was appointed to draw up plans and submit for raising the money. In March and April of 1899 a subcommittee of five ladies was appointed to raise the money and a vote was held that determined that the building would not cost more than $2,000.

On December 1, 1899, less than one year from the beginning of work, the Association held its first meeting in the new building, which was dedicated one week later. This was located on Church Street across from the Congregational Church. For several years, this building also served as the offices for town officials.

Nellie Warner became librarian in 1918 and served until 1958. In 1926, the books and building were deeded to the town and, for the first time, direct fees were no longer charged. This is not a decision that was taken lightly; in fact it took longer for this to come about than it did to erect the building itself! A subcommittee of the Association, consisting of Mr. Charles Boardman and a lady whose name is familiar to us all, Mrs. Cora J. Belden, was appointed to study the proposal.

Time Line - Over 200 Years of Library Service in Rocky Hill

Dec. 11, 1794 - Formation of the Social Library at a meeting held in the home of  the Rev. Dr. Calvin Chapin, pastor of the Congregational Church of Stepney Parish.

Jan. 5, 1795 - Formation of the Free Library of Stepney Parish, probably for political reasons, with Elisha Church as librarian.

1794-1847 - The Social Library is housed in Waite Williams' store at the "Landing" approximately where the ferry slip is now. Waite Williams succeeds Dr. Chapin as librarian.

1850 - The Union Library Society of Wethersfield, formed in April 1784, closes because of apathy and the books are sold. Hence Rocky Hill's claim to be the oldest continuously operating library in Connecticut.

June 1855 - The Rev Lubin Burton Rockwood, Pastor of the Congregational, organizes a new society. This merges with the Social Library to become the Social Library Association of Rocky Hill. Mr. Rockwood is president and librarian. From 1855-1866 the library is located in Mr. Rockwood's home, 42 Riverview Road.

Jan. 5, 1877 - The Rocky Hill Library Association is formed and merged with the Social Association with the hope of finding a permanent home for the library.

1886-1896 - The library is located at the Bulkley House, the former Valley Hotel, at the corner of Main Street and Grimes Road.

Dec. 16, 1898 - The Rocky Hill Library Association votes"that the Executive Committee be empowered to purchase land for a building site."

February 10, 1899  - Voted that the committee's report on the purchase of a building lot be accepted and that a committee of five be appointed to submit plans for a building and to suggest ways and means as to raising funds for the same.

March 1899 - Voted that a subcommittee of five ladies be appointed to raise funds.

January 11, 1924 - Committee of two appointed to investigate and report on procedure necessary to form a public library.

September 25, 1925 - The building and books are offered to the town by the  Library Association. The offer is accepted and on September 1, 1926 the town begins to operate the library. Direct fees are no longer charged.

April 5, 1950 - At a special town meeting the name of the Rocky Hill Library is officially changed to the Cora J. Belden Library in honor of  Mrs. Belden's more than 30 years of service to the Library Board.

April 1979 - Dedication of the expanded building.

April 2020 - Celebration of 225 years of library service in Rocky Hill. 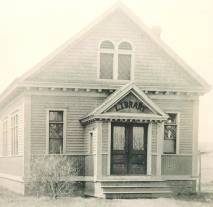